Instagrammable places in New York City are everywhere and if you’ve never been, it’s magic! What they say about Manhattan is true; it really does have an amazing energy to it. For an island that’s really not that big, there’s a whole lot of inspiration… pretty much everywhere you turn. Navigating all of that inspiration can be a lot to handle, so we’re sharing our favorite Instagram-worthy spots around New York City.

It can be pretty confusing trying to understand all the different neighborhoods in the city. To give you a brief overview of the different neighborhoods, there’s uptown and downtown, the East side and West side. Uptown can be a bit corporate, but filled with a mix of beautiful brownstones and high rise apartments (and of course, Central Park). It’s where you’ll find the Met and Central Park. Downtown is lively, with tons of character and older architecture. It’s home to iconic places like SoHo and Wall Street. The East side is funky, where you’d picture a 70’s movie set in NYC would be filmed. The East side is known for great bars, the East Village and NYU. By contrast, the West Side is a more proper kind of beautiful, with tons of townhomes, quaint stores and good restaurants. The West side is where Tribeca and the West Village are located, Madison Square Garden and the Chelsea area.

Although we said the island really isn’t that big, there are still so many neighbourhoods to visit with so much to see, so we’ve broken down the most Instagrammable Places in New York City! 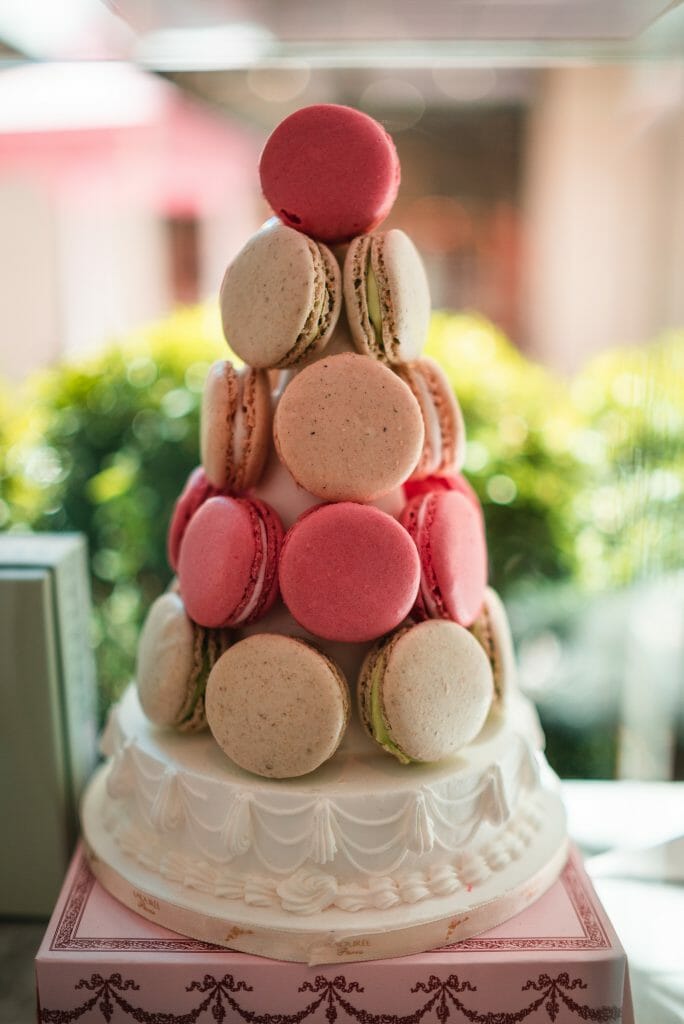 Laduree’s famous macarons are enough reason to visit their SoHo location, but their garden is definitely an added bonus. No exaggeration, the outdoor space makes you feel like you’re in a private backyard somewhere romantic in France. In the afternoon, the light in the garden makes for a great photo, as do the pretty little pastries, cookies and tea. Hello flat lay shot. The garden space is surprisingly big for New York City, but it does fill up quick. If you’re planning to stop by on the weekends, definitely plan to get there at, or shortly after, it opens. 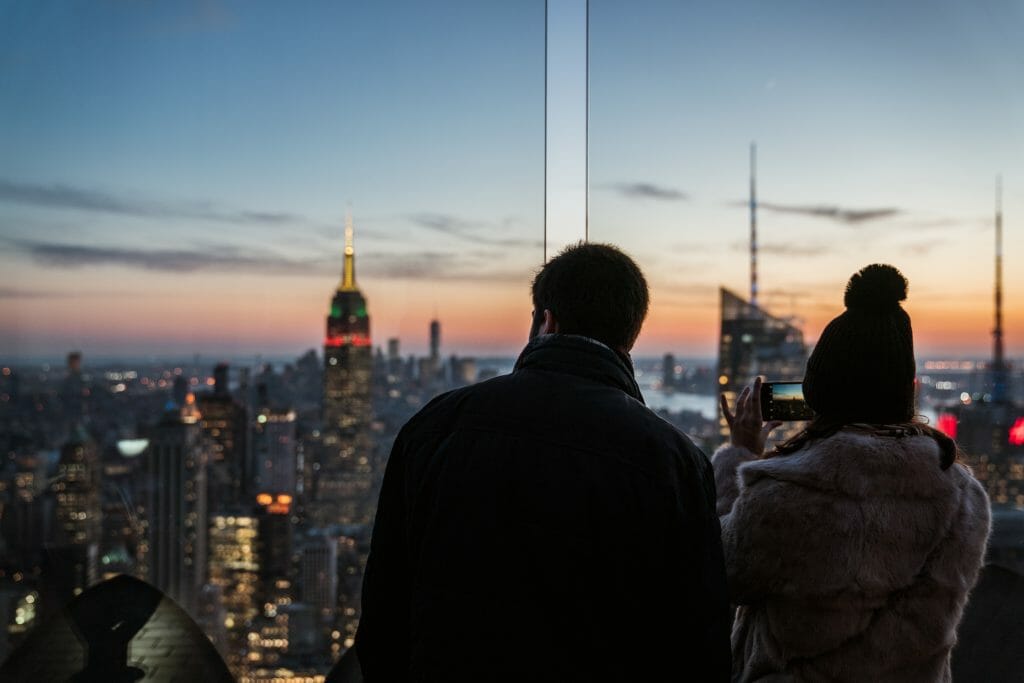 This one’s a given. If you haven’t been to the Top of the Rock, it’s one of the best panoramic views of the city there is. We especially love the view from the top of this building because you can see the Empire State Building perfectly. Trust us, it’s much cooler to see the Empire State Building up on the Top of the Rock than to be up on top of the Empire State Building. The spot has tons of those vintage style quarter-slot binoculars, which is always a great photo prop, plus it has different decks for different perspectives and photo opportunities. A little tip to visiting this must-see spot, go early. This spot isn’t exactly hidden and a line usually forms around noon. It’ll cost you $30 to go up to the top, but it’s a great experience, of course, on top of giving you a great photo.

While We Were Young (West Village, Downtown)

This place really is the best of both worlds because on top of being super cute for photos, it also has the coolest cocktails. This place is an Instagrammers paradise, with pink velvet benches, marble tables with gold accents and a neon sign. While We Were Young has become a go-to for New York bloggers for everything from flatlays to those “candid” shots sitting at a pretty table. There’s a good reason for it. While We Were Young is located in the West Village and is very quaint. Get there early if you want to take photos without anyone else in them. There’s only windows along one side of the wall, so be mindful of the lighting. 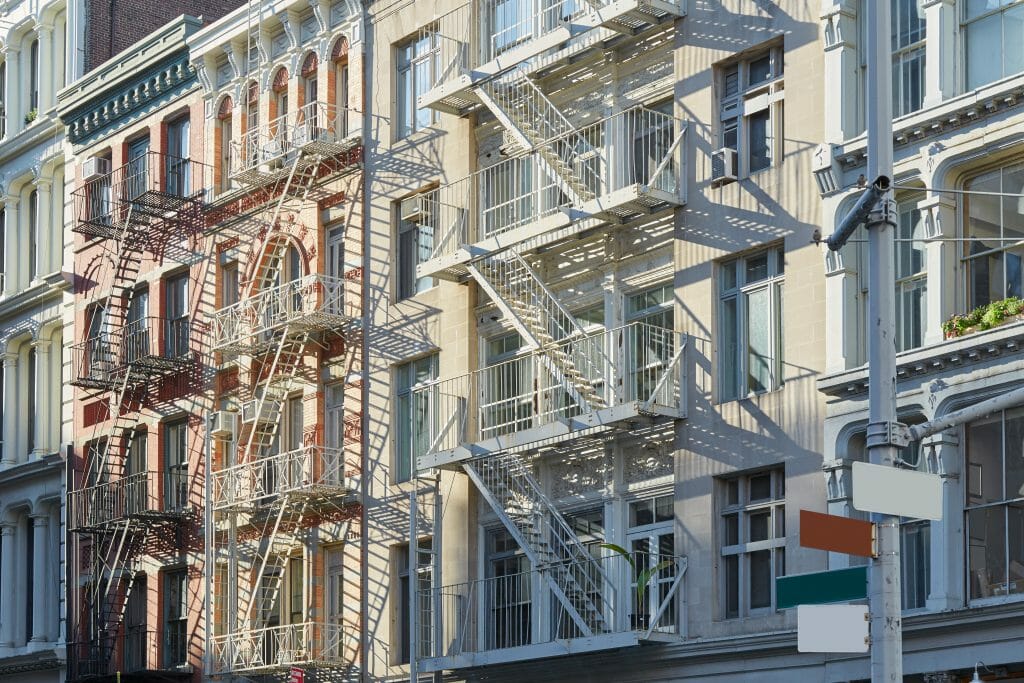 Honestly, we shoot at this corner a lot. Somehow we’re still not sick of it, if that tells you how great this photo spot is. The corner of Broome & Greene has all the things you love about SoHo, at all 4 corners of the intersection. We’ve photographed up to 5 looks at this one intersection because you really don’t need to venture that far from it to find something Instagrammable. If you do decide to venture from this intersection, and you definitely should, you’ll find that it’s the perfect epicenter for all of the best parts of SoHo.

Added bonus:  Dr. Smood, a really cute and amazing tea/coffee/juice/smoothie shop is right at this intersection, and as long as you buy something, they’ll let you use their bathroom as a changing room so you can easily shoot more than 1 look. 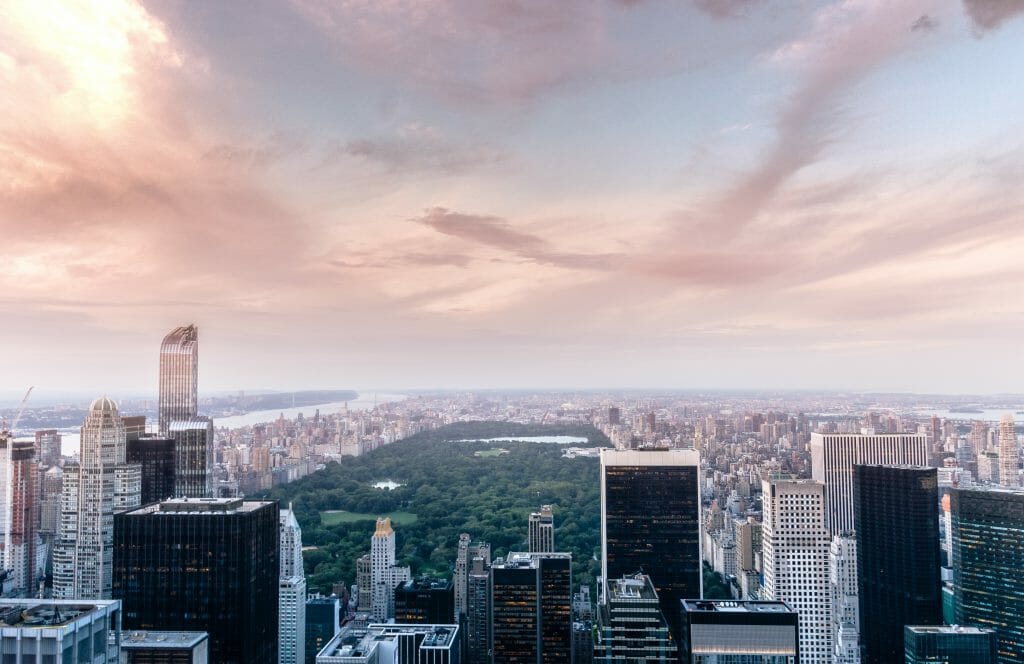 Central Park is an obvious pick for Instagrammable spots in New York City, but honestly, there’s a million different things to do in there so it’s hard not to mention it. Want to shoot in a zoo? Go to Central Park. Want to shoot near a castle? Central Park. Looking to shoot in a row boat or near the water? Still Central Park. The whole entirety of the park runs from 59th Street all the way up to 110th Street. That’s a lot of land, attractions, pretty areas. The park even has a photo-worthy ice skating rink in the colder months.

The Brooklyn Bridge (East Side, Downtown)

The Brooklyn Bridge is also one of those obvious options for great NYC photos, but we couldn’t resist listing it again. The Brooklyn Bridge is great for a lot of reasons. The bridge, itself, is pretty iconic, plus it offers views of both the water and the Manhattan skyline at the same time. The bridge is so, so busy (especially since the NYC subways have been slowing service to Brooklyn). If you want to get a photo that’s even remotely Instagrammable (aka little to no other people in the photo), you want to get there super early.

Pro tip for the Brooklyn Bridge:  there are really busy bike lanes painted onto the far sides of the  bridge. Speaking from experience, the bikers take their territory in that bike lane pretty seriously, so make sure to stay out of their way.

You probably don’t know what I’m talking about when I say “La Esquina” as a photo spot, but you’ve 100% seen it on Instagram before. This crosswalk/restaurant/billboard area is in an area called Nolita, a little North of SoHo. This little area outside of a Mexican restaurant called “La Esquina” is a go-to for every type of blogger for a good photo. There’s a crosswalk, tons of cabs, an ever-present (and super chic) Saint Laurent billboard, and obviously, La Esquina, a quirky Mexican joint with sidewalk tables, funky lights and outdoor seating. Honestly, the whole area is pretty quirky, so be sure to check out the surrounding streets if you find yourself shooting here.

Pod39 is known more for its happy hour bar than for its aesthetic, but for anyone that’s into taking cool photos, this place is a hidden gem. On the roof of the Pod39 hotel are two really cool photo spots, with two very different vibes. The happy hour bar we just mentioned is one of those spots, with tons of green ivy, classic red brick, strings of lights, and cool archways that frame view of the city. It’s a very “hip” Manhattan vibe, in the most unpretentious way possible.

The second location is actually in the entryway, right outside of the hotel elevators on the rooftop level. The hotel has a restaurant in the bottom called Salvation Taco (which is actually really good, so if you decide to shoot here, definitely consider getting some tacos while you’re there). Salvation Taco has a small space on the roof that’s decorated like a beautiful Spanish villa in the Mediterranean, no joke. It’s so beyond perfect for photos that it’s hard to find the words to adequately explain the space.

Pro Tip for Pod39:  The happy hour gets pretty crazy at this place. If you want to take unobstructed photos, head to the hotel early. The entire roof doesn’t open until later in the afternoon, when happy hour starts at 5PM, but if you walk right into the lobby like you belong there, the elevators will take you straight up.